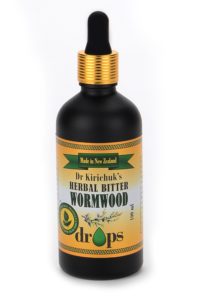 Dr Kirichuk’s Herbal Bitter Wormwood Drops are composed in the best traditions of the preventive medicine. Based on the well-known healing properties of Wormwood (Artemisia absinthium). All parts of the plant have been used in traditional medicinal practices for hundreds of years.

Wormwood has been associated with many benefits, such as alleviating pain and inflammation and fighting oxidative stress and parasitic infections.  It helps to improve digestive health and metabolism. Wormwood has tonic properties, in addition to many more.  It aids to combat oxidative stress in human body, which is associated with cancer, heart disease, Alzheimer’s, and other ailments. Wormwood is a well-known Aphrodisiac. It assists to regulate menstrual cycles.

In order to extract and deliver the precious Natural Adaptogens from Wormwood to human body, Dr Kirichuk (MD) uses her original technology based on the scientific fact that strong food-grade alcohol (Ethanol) is the best possible extractor (as described in Pharmacopeias). Ethanol is also the best natural preservative, which provides a long-shelf life to the remedy without having to use any other preservatives. And, the last but not the least, Ethanol is an excellent carrier of adaptogenic goodness to the cellular level.

Dr Kirichuk’s Herbal Bitter Wormwood Drops is a concentrated classic medicinal tincture, each drop of which is a treasure filled with the healing adaptogenic properties of Wormwood.

Both the observations made since the ancient times, and the modern scientific research state that Wormwood has the following sensational properties:

Other ingredients: food-grade alcohol solar-distilled at Puhoi Organic Distillery and Artesian water from the deep 221 meter bore located on the Kirichuk family property.

SAFETY & STORAGE: bottled in 100ml apothecary quality black glass bottles protecting the product from exposure to sunlight. The bottle is equipped with a safe rounded tip dropper. Store in a cool dry place away from heat and direct sunlight.

APPLICATION: Take two or three times a day, mixed with suitable drinks (such as water, juices, wine or other alcoholic drinks) before or after a meal.

Single dosage:  10 to 20 drops per portion, depending to individual tolerance to extra bitter natural Wormwood taste.

WARNING: For adults only. Avoid use during Pregnancy and Lactation 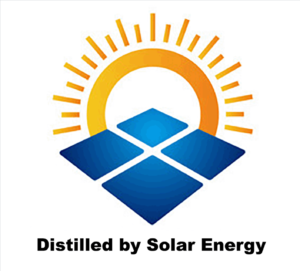